skip to main | skip to sidebar

There is a huge and 'unexplained' (sic) temporal asymmetry in the many taser-associated deaths...

Such taser-associated deaths always seem to occur only if the taser is actually fired and the darts actually hit the victim. I've followed the taser news for several years, and I've yet to see a single report of a subject falling over dead upon hearing the pre-taser-deployment warning, "Taser, Taser, Taser."

Please note that when a taser is even drawn from its holster, many jurisdictions will require a written report; even in cases where the taser is not fired. And reportedly, the taser is drawn far more often than it is actually used (figures as high as 10X are mentioned). So there should be no shortage of display-only taser reports with fatal outcomes (if their claims of non-causality were true).

This time before the taser is fired provides a form of experimental control in the great debate over taser safety (safety, in terms of life-and-death).

If there was not a direct cause-and-effect relationship from taser use to the associated deaths, then we would logically expect that there would be roughly as many taser-incident deaths to occur per taser incident and per unit time just BEFORE the taser is fired as just AFTER.

But that doesn't appear to be the case. We've got about 485 655+ cases where people were tasered and then died, and we'd thus expect (if their claims were true...) that there should be many many hundreds, or possibly even thousands if the 10x display-warning/actual-hit ratio is correct, of police taser reports where the taser was pulled out, but the subject dropped dead BEFORE it was actually fired.

I don't believe that there are very many such reports. I'll bet that they're few and far between. Either zero, or close to zero. As opposed to hundreds or thousands. Repeat after me: "statistically obvious discrepancy".

Which leaves this perplexing asymmetry in the temporal distribution of all these many taser-associated deaths. 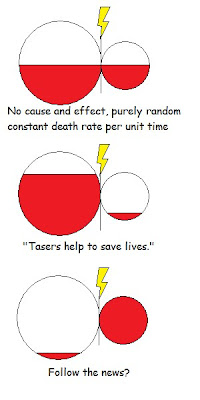 There's only one rational conclusion:

The claim that the usage of tasers bears "zero causal relationship" to the many taser-associated deaths does not appear to hold up to this sort of logical scrutiny.

Note that this simple observation trumps the lack of evidence about the cause of death in any particular case. Since it is a given that there is not yet any reliable and well known postmortem test for any of the plausible taser death mechanisms, such a lack of direct evidence at postmortem is a given and doesn't actually prove anything.

(The following graphic is for illustrative purposes only and is not based on anything more than my recollection of the many news reports of taser-associated deaths, and the fact that Taser International isn't proudly showing off a thick stack of reports of the hundreds [now THOUSANDS] of people that died just BEFORE being tasered. Actual data may vary. The ball is in Taser International's court to explain-away this very simple observation.)

PS: I can anticipate that another one of the pathetic attempts at a rebuttal will be as follows:

"But we only actually fire the taser in the very worst cases of excited delirium. This is a form of self-selection that will tend to bias the distribution."

But those "worst cases" are (according to your worldview) the ones most likely to die sooner than later, and thus those are the class of victims that would show the strongest early-biased distribution. They should be dropping like flies more BEFORE than AFTER.

Also, the apparent real-world asymmetry isn't some little tiny bias that you can try to explain away. It's an overwhelming and seemingly obvious temporal discontinuity.

They have no response to this obvious observation, except that they've finally stopped spouting logically-flawed, but impressive-sounding, Latin lunacy.

Their stoney silence is as close as we will see to an admission that they've been making incorrect statements.

UPDATE 2011: Taser International issued a new "Training Package" dated 1 May 2010 that contained some bombshell admissions. For example, with respect to avoiding aiming at the subject's chest, they've shifted from claiming this recommendation was simply to "avoid controversy" and they now admit the recommendation is to "avoid the increased risk" of cardiac effects. Also, they've quietly withdrawn their "Cardiac Safety" webpage. All in all, they have basically abandoned their previous claims that tasers could never affect the heart. They now admit that tasers can affect the heart, and that the risks include death.
Posted by Excited-Delirium.com at 4:38 PM 1 comment:


See the main blog at
www.Excited-Delirium.com
(don't forget the dash).